Both the Wells River Chevrolet Flying Tigers and Foley Oil & Propane Late Models have 76 green-flag laps to honor the year the Declaration of Independence was signed. The Woodsville Guaranty Savings Bank Strictly Stock Mini’s and Dads 4 By Tool & Supply Kids Trucks join the card against a scenic White Mountains backdrop.

END_OF_DOCUMENT_TOKEN_TO_BE_REPLACED

WINCHESTER, N.H. – There’s a new sheriff in town at Monadnock Speedway. His name is Tyler Leary, and he’s rounding up Modified feature wins.

Winless for his career only eight days earlier, the Hatfield, Mass. pilot set fast time in qualifying Friday at the high-banked speedplant and then roared to his second NHSTRA Modified feature win in a row. Friday’s victory, like the one a week earlier, was scored over some real thoroughbreds.

END_OF_DOCUMENT_TOKEN_TO_BE_REPLACED

Hudson, NH — Candia, NH’s Jimmy Renfrew Jr. capped a perfect weekend on the racetrack with his first career ACT Late Model Tour victory on Sunday, June 20 at New Hampshire’s Hudson Speedway. Renfrew got the lead early and kept some of the best American-Canadian Tour (ACT) Late Model racers in the business at bay to score the Father’s Day win in a car owned by his dad James.

It was the fourth straight event where the ACT Late Model Tour had a first-time winner, bringing the series total to 82 different winners since its inception in 1992. For Renfrew, it came less than 24 hours after he triumphed in a 50-lap feature at White Mountain Motorsports Park.

END_OF_DOCUMENT_TOKEN_TO_BE_REPLACED

N. Woodstock, NH — East Thetford, VT’s Matt Sonnhalter stood firm through everything the North East Mini Stock Tour (NEMST) field could hurl at him on his way to victory at North Woodstock, NH’s White Mountain Motorsports Park on Saturday, June 9. Sonnhalter took the lead on lap 8 of the 50-lap feature and held off a huge pack in the final dash for the win.

The NEMST veteran started seventh in his familiar #33VT truck and did not need long to get the lead. Passing nearly a car a lap, Sonnhalter flew past Seekonk, MA’s Mike Viens to grab the top spot with just eight laps complete.

However, that was just the beginning of Sonnhalter’s battle. After a caution on lap 12 for a tangle involving Emerson Cayer and Cody LeBlanc, things got serious for the crown. As Sonhalter fended off Robert Anderson, Viens, reigning NEMST champion Desmond Skillings, and others at the front, LeBlanc and Cayer were flying out of the back.

END_OF_DOCUMENT_TOKEN_TO_BE_REPLACED

WINCHESTER, N.H. – Tim Wenzel won the 50-lap Teddy Bear Pools and Spas Street Stock main event Saturday at Monadnock Speedway. It was the Holyoke, Mass. speedster’s second win in a row, this one worth a cool $1,000.

With the first 76 laps of feature racing flying by caution-free, the fast-paced event produced four first-of-the-season feature winners Saturday on the high banks.

Tyler Leary got the job done in the NHSTRA Modifieds, Nick Houle rocketed to the Pure Stock checkers, former track champ Louie Maher rocked the Minis, and John Thibodeau scored a thriller in the Six Shooters.  Eddie Petruskevicius scored his fourth win in the Young Guns.

END_OF_DOCUMENT_TOKEN_TO_BE_REPLACED

Waterbury, VT — The American-Canadian Tour (ACT) and Pro All Stars Series (PASS) are days away from a trip to New Hampshire’s Hudson Speedway. The Sunday, June 20 tripleheader is a long-overdue journey to the Southern New Hampshire bullring for both series as their championship battles heat up.

The ACT Hudson 150, which is on the first official day of the 2021 summer, is only the second ACT event at Hudson Speedway ever — and the first in 20 years. The PASS Super Late Models are making their inaugural trip to Hudson as the track celebrates its 75th anniversary.

A work in progress.

This is a work in Progress

McKENNEDY ROCKS SUPERS; LEARY DOUBLES UP IN MONADNOCK MODS By Gary Dutton             WINCHESTER, N.H. – There’s a new sheriff in town at Monadnock Speedway. His name is Tyler Leary, and he’s rounding up...

END_OF_DOCUMENT_TOKEN_TO_BE_REPLACED 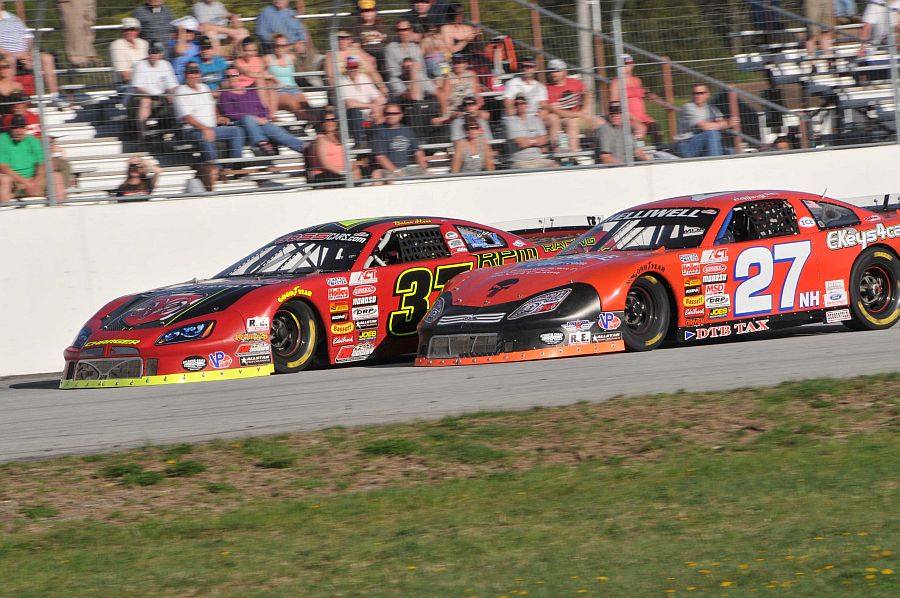 McKENNEDY ROCKS SUPERS; LEARY DOUBLES UP IN MONADNOCK MODS By Gary Dutton             WINCHESTER, N.H. – There’s a new sheriff in town at Monadnock Speedway. His name is Tyler Leary, and he’s rounding up...